on January 18, 2018
This genus of well-known and often coveted bulbs is native to Europe from the Pyrenees in the west to Caucasus, Iran and Turkey in the East. Many people think the Snowdrop is a native of Britain, or brought to the British Isles by the Romans but it is more likely they were introduced in the 16th Century.

They do well in shady conditions, under trees or shrubs in moist but well-drained soil, with some leaf mould if available. Here they will naturalise and spread around giving a fabulous display in the depths of winter when we need some cheering up. Once planted Snowdrops are self-sufficient and happy to be left to their own devices. Some of the more unusual varieties are a bit choosier and because they are a bit more expensive to buy. I like to grow them in my alpine troughs, so I can keep an eye on them and they have fewer plants to compete with. Some cultivars need a bit more attention, cover and protection in winter or grown in pots, but that’s a whole other topic of conversation. For now, I’m going to concentrate on the ones I love and grow in my garden. I have found they do very well on our exposed hill in the Scottish Borders at 850 feet above sea level in clay soil

Our hearts and minds lift at the first sight of these tiny, delicate yet extremely hardy little gems. I have several cultivars dotted about the garden along with the common Snowdrop Galanthus nivalis. The species spreads itself around very well if it is happy. The cultivars take a bit longer to bulk up, apart from Galanthus nivalis 'Flore Plena' which spreads as readily as its species cousin. Plant Galanthus with other winter interest plants such as Bergenias, Hellebores, Winter Aconites, early daffodils, Crocus and evergreen ferns for a wealth of winter interest in the garden.


In recent years Snowdrops have become a bit of a collectable genus in the horticultural world. Their collectors have even earned their own collective name: Galanthophiles. People will pay a small fortune for one tiny bulb of rarer varieties, with some going for over £300! I once bought 3 bulbs of Galanthus 'John Grey' for £8 a bulb and thought that was excessive. There are many books on the subject and several specialist nurseries selling them. Popular and very collectable are yellow snow drops such as G. 'Wendy's Gold'. Another yellow is G. 'Lady Elphinstone', a double and so very striking.

The flowers of Snowdrops are well worth looking at closely. Each flower is a drop of white with different markings and this is what makes them interesting to collectors. The nodding bell-shaped flower is held on a slender stalk amongst the leaves. The flower usually bears six tepals rather than petals arranged in two whorls of three, the outer being larger. The shorter inner tepals ate tapered and usually bear green markings at the base, occasionally the markings are yellow, green-yellow or absent depending on species.

When buying snowdrops, it is always better to buy them in the green, i.e. when they are in leaf, not as dried bulbs. There are lots of nurseries advertising snowdrops in the green: be sure they come from a reputable source and are not being dug up in the wild! For some of the rarer gems have a look at the following nurseries: 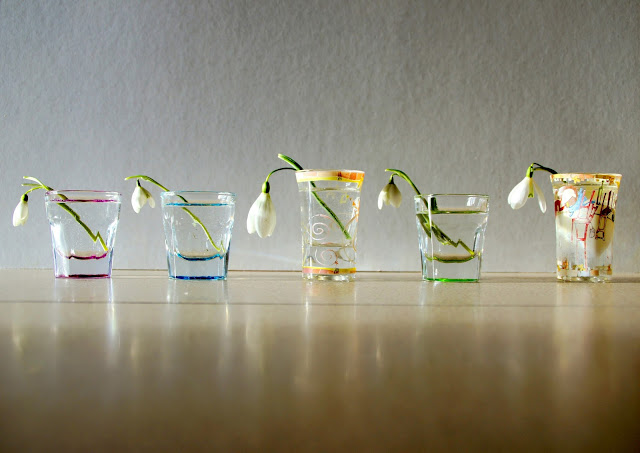 A great way to see Snowdrops and spend a pleasant Sunday afternoon with the family is to visit one of the many gardens that open in February for the snowdrops. The easiest way to find out where there is one near you is to do an internet search for "where to see snowdrops". Here are some of my favourites and recommendations, including blog posts of Snowdrop visits we’ve done: 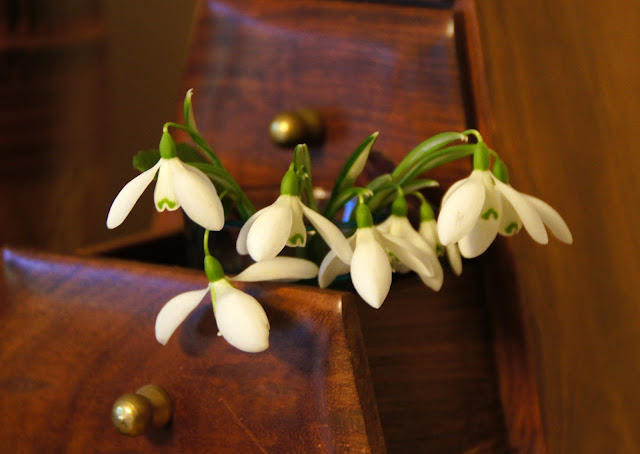 Snowdrops are good for cut flowers, bees, long flowering, winter interest, clay soil and shade. If you have a space in a shady part of the garden I would recommend you give these plants a go. Which one to go for depends on your colour preference. I have grown all these growing in an exposed garden on clay soil. The Quirky Bird recommends the following:

Galanthus nivalis
The common Snowdrop with its small white, bell flowers with a green smudge on the inner petals. Easy to naturalise. H 15cm.

Galanthus 'Hill Poe'
A late flowering double whereby the solid looking flower is tightly packed with inner segments that form a neat rosette. Grows well with us in clay soil.

Galanthus 'Magnet'
White with green markings, the distinctive feature is the long pedicel (the spur connecting flower to stem) which allows the flower to dangle and sway with great grace in any breeze.

Find out more about the nursery here - our web site: www.quercusgardenplants.co.uk

All contents  and photographs ©  Rona, unauthorised reproduction & use of these images is strictly forbidden, thank you