on October 03, 2016
Running behind again, this is last week, in fact no, the week before, where is the time going? Bear with me while I try to catch up! Hope you are well and enjoying this glorious weather we've been having. I love autumn, especially when it is warm and sunny.


While I was off on Monday I sat down with my diary, task list and list of outstanding jobs or half finished jobs and did my weekly plan. I decided this week I was going to finish off every part done job, so that (hopefully) by the following Sunday I would have scored them all off and be able to start new jobs the following week. This would also help clear my cluttered brain (a bit) and get these jobs out the way. So far so good.


After I had finished the cafe flowers, had a mocha and blagged a free scone and jam in exchange for a bag of fresh thyme from home I did some real work. I checked the tunnel for watering and then started this week's strict finish off jobs task list. Wednesday's task was to finish weeding and tidying the stock beds. It's an ideal job to check stock as I work through them, making notes of plants to pot, propagating to do and so on. I almost got them done before the end of the day but less than hour should see them done the following day.


First thing on Thursday I headed to Daniels' school to his prize giving. He was awarded for his hard work with a certificate for endeavour, another proud Mummy moment. It was another lovely day with clear blue skies setting off the autumn leaves on the trees in the sales area. I finished tidying the stock beds and then moved onto tidying the sales area. I re-did some of the main tables, removing plants that have gone over and replacing with more seasonal plants. I put together a table of Acers which are showing lovely autumn colour and put some evergreen ground cover plants around the pots on the table. Colchicum autumnale is now flowering so I put some of these out along with grasses and some feverfew having a late flush of flowers. I was really pleased with the results and it's very eye catching from the car park. 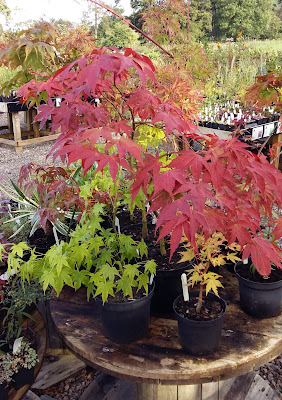 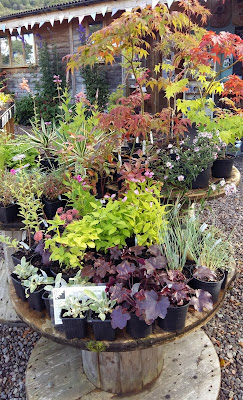 So far so good with the task list, every day I've ticked off those half done jobs and ticked off every job on the daily list. That the weather has been dry and I've got the outdoor jobs one has definitely helped. Perhaps the most exciting thing about Thursday was the hot water and heating being fixed at home. We've been without hot water for five weeks and heating for two. The lack of heating hasn't been two difficult as it's been a warm September, but the temperature in the mornings is dropping.

On Friday I finished tidying the herb table and shade tunnel in the sales area. I replaced some tired plants in the shade tunnel with Hellebores and evergreen Euphorbia robbiae for winter interest. I also got the track up to the nursery weeded and three of each herb we have in stock potted up to grow on for the herb garden. This is to be our winter project on the middle terrace, a traditional herb garden laid out with brick edged borders and gravel paths. I want the plants to look well established when I plant it up in the spring, hence potting up the plants to grow them on, They have gone into the tunnel to get as much encouragement as possible.


Friday evening saw us on a night out in Glasgow at the Bothy, a lovely place, great food and staff. The event was a reunion / birthday get together for David's uni friends when they were at Glasgow University, quite a while ago. It was great to meet people I had heard stories about and put faces to names, eat good food and just have a lovely night out. We crept home after 1am, fortunately it's a later start at the weekend for us at the nursery.

Saturday and it was David and I's fourth anniversary of the day we first met, where does the time go? Once David was back from buying postcrete I headed over to the tunnel to try and catch up there. I haven't done much there for nearly two weeks, so a bit of weeding and potting to catch up on. Still it's warm and cosy once the door is closed. I also brought in the spring bulbs left over from last year back into the tunnel. I re-potted them all and they will now grow on for sale next spring. In the afternoon I lifted some roots of Geraniums and Sanguisorbas that customers have been asking for over the summer. These will be potted up and be ready for sale next year. We treated ourselves to takeaway on the way home, I know, I know. What about the diet I hear you cry, what about fitting into a wedding dress. I'm tired, the Chinese take away van in West Linton is very handy and the food good, so for now the diet can wait another day.

Another couple of hours in the tunnel on Sunday morning saw me almost caught up. The weather was dryer but still windy, hopefully that will go soon, I don't like the wind. I spent the rest of the day potting up plugs (another tick off the finishing jobs list) and potting and propagating (while it's still warmish). The light in the early evening was dramatic across the field behind the house as you can see from the photo below.


This week's days off were a bit topsy turvy. David is finishing off lots of work as the survey season comes to a close for another year so he was busy on Monday and Tuesday. Since youngest and oldest were at home I decided to take them out for the day. We decided to drive over to the air museum at East Fortune in East Lothian. It is many years since I've been here and there has been a lot of changes and improvements. You can see their website here. We spent some time looking around the concorde hanger, getting up into the plane and wishing we'd had the chance to fly in here across the Atlantic. After lunch in the cafe there we had a walk around the rest of the museum's hangers. There is lots for all ages in the museum, I liked the 1940's war time music in the back ground in some of the buildings and the filmed memories of airmen who had served time at East Fortune.

On our way home we went and bought some new fish for the big tank at home and some extra food as eldest is coming home for a week while his leg is mending. As I said it was a mixed up couple of days off so I did my domestic chore on Tuesday when David was out working. I did the house cleaning, baking and some garden chores too.


One of the other jobs I did was to trim up the box balls and pyramids in pots in the front garden. Unfortunatly they have red spider mite so I will spray them every week or so and hope that it clears up. the plants also got a feed and top dress of fresh compost.


There we go, another week been and gone, and yes I did finish everyone of those jobs on my list which I was really pleased about. It simplifies things moving on into October and hopefully getting everything I want to achieve before the end of the month.

I hope you are having a good week too.