A Hint of Autumn

on September 16, 2016
Whether we like it or not the nights are getting shorter and the mornings colder, although this week  the days have been warmer, hotter and quite humid at times. It is also making finding plant material for the cafe flowers a bit more challenging. Fortunately Asters are now coming into flower and there is an abundance of them in whites, blues and pinks. We also have a good range for sale in the nursery. The house garden is beginning to fade too with the last of the perennials gamely flowering alongside the beginnings of autumn leaf colour on shrubs such as Acers and Euonymus. I am getting a couple of late autumn raspberries everyday as a breakfast supplement on the way to my car, sometimes I get a bonus wild strawberry or two.


Over the past week I've been weeding all the planted borders, this will probably be the last big weed before winter (I hope). As well as making the place tidier and getting rid of the weeds it allows me to look the plants as I work past them and see how they are doing. I have replaced a couple that haven't survived and weeded out some that are not what they are supposed to be! I've also been continuing to pot up and propagate plants in the stock beds to get as much done before winter. There is still time for plants to root through before winter and they will be ahead come spring. Thursday was wet and miserable and ideal for getting a lot of potting done, a kind of catch and moving forwards day.


There is less to do in the tunnel now, just a bit of potting up to finish and keeping on top of the weeds. I spent an hour or so first thing on Saturday and Sunday doing just that and moving out some winter and spring bedding ready to go to sales. These include wall flowers, ready for planting and Cyclamen and Bellis about to flower. Now is a good time to get these plants in along with spring bulbs, ready for some spring colour next year. I finished up the border weeding, ending at the border along the top of the banking alongside the stock beds on Sunday. On Saturday after we'd finished work at the nursery we decided to make the most of the nice weather and have a walk around the farm.

On Sunday we worked on getting the last six feet of the border at the top of the banking finished. We got all the perennial weeds lifted off, not easy when it involves a mat of couch grass, nettles, creeping buttercups and creeping thistle. I then dug over the area ready for planting. I had all the plants I wanted to put in here so it got planted, one more task off the list. I have put together a mix of big structural grasses and late flowering perennials in pinks and blues. Most of these plants are available to buy in the nursery. The planting list: 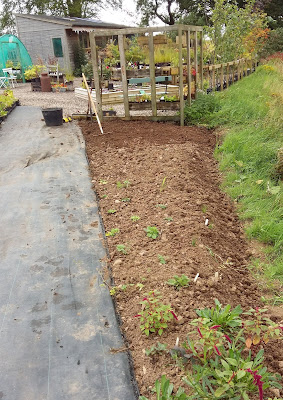 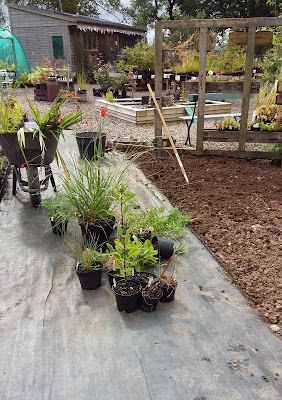 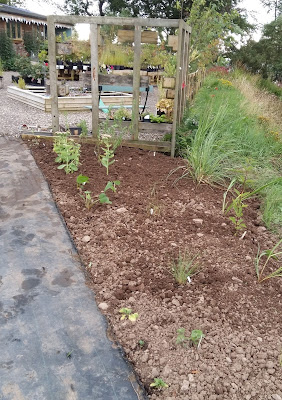 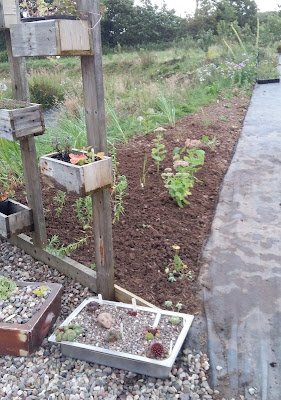 After a busy weekend it was good to relax over dinner at home, we treated ourselves to some good steak, roasted sweet potatoes and squash, onion rings and a good bottle of red wine. It was very nice even if I say so myself. We then collapsed on the sofa to watch TV. All was well until about 10pm when there was a huge crash outside the house. We immediately knew what it was, the rotten tree at the end of the front garden. It had given in at last to the wind (we were not surprised, we've been expecting it since we moved in). The problem was it had come down right over the road, so there we were after 10pm, with torches to flag down vehicles, phone the police and wait for action. The council roads department got 5 stars for turning up within 45 minutes with a team armed with chainsaws and the road was cleared. Never a dull moment in this house! The biggest problem was the fallen tree had taken down out phone line and internet, I hate dealing with BT.


Monday and a day off with the house to myself, well apart form the animals. A long lie then on with the house cleaning. Amazing how quickly you can get it done in the morning when you've got energy! Having no internet is frustrating, especially when I have emails to do for the nursery. So no rest for the wicked and off to the nursery to do emails, had a coffee and blether with folks in the cafe and Dee in the gallery. Always good to catch up. Once home I did some baking, yes I did, it's been so long, well over six months, in fact since I began working six days at the beginning of March. I made a batch of bread, some cheese, tomato and garlic muffins for David and chocolate muffins for Daniel and I. I really enjoyed messing about in the kitchen, making nice things to eat.

We had a nice wee day out chasing Romans again after a very long, much needed lie in. With home made bread for breakfast we then off in the car heading for the Antonine wall. We went to Rough Castle Roman fort first, sitting near Bonnybridge on top of a hill where Romans would have had good views along the valley. You can get visiting information here. There were lots of signs of defences, remains of the ramparts of the wall, defensive pits and outlines of walls to see under the oak and birch trees which were beginning to take on their autumn colours. Bracken had a dunk in the stream after rolling in something disgusting and we pretended to be Romans and celts (No surprises David thought he should be an imperial Roman standing on the wall! I was more than happy to be a celt running up dodging the ridiculous roman doglet).

We then headed east to Callander House where the Antonine wall becomes apparent again. There is a decent length of it in the grounds where you can walk between the ramparts again. Check visiting info here, unfortunately for us the house is closed on a Tuesday. From here we stopped for a late lunch before carrying on to our final Roman destination for the day, Kinneil House in Bo'ness. See here for info.

We meandered home to find the phone line and internet fixed (yeh!) and the new chicken house delivered and Daniel putting it together.

So that's my week, another busy, varied and surprising, you never know what's going to happen next do you. Hope your week has been great. Catch you later, meanwhile here's what I was up to in previous Septembers

A Salix from the dark side

Bark is not just for Dogs

Creating the Herb and Fruit Planters

A house with 360 Degree views