It's all about bright colours this week for the cafe flowers, I love Gerberas, they last for ages as cut flowers and are great for photographing too. Just what is needed on a very windy, cold overcast Wednesday. As David was at the nursery for the day I took the opportunity to spend time in the tunnel potting seedlings, tiding more plants to come over to the sales area and making more room. I do enjoy working away in the tunnel, especially when the weather is unpleasant outside. Once back in the nursery I put all the plants bought over from the tunnel away in the stock beds or labelled and into sales. The stock beds are really colouring up now and the compost is disappearing under new growth. It is so satisfying to see this and no messy neglected, weedy plants any more. Once David's car service was finished, I ran him to the garage and then it was home for tea and evening chores before feet up on the sofa with the doglet. I really hope these high temperatures that are forecast for the weekend do happen. We will see.

It's funny how some days start well, go a bit funny in the middle and then turn good again. Thursday was one of those days. You know those days when you get lots done, it's going great, you're on fire and flying through the to do list and life in general and it's not even lunch time ....... and then something / someone decides hang on a minute, I don't think so you ain't going home thinking he that was a good day, so lets throw some spanners in the works ..... technology meh ......... that was my day.

The main reason was the label printer, it's worked perfectly until I had to put in a new reel of labels, then nothing, despite following the handbook, thinking it through logically, I switched it off and on a couple of times too, ha ha. I'm not stupid I can do these things, any way eventually I had to step away or I would have thrown it through the window. I was annoyed because I wanted to get lots of lables printed for the sales tables, arghhhh. Anyhoo I spent the morning tidying the sales area, I decided to swap a few tables round, put the grasses further back as they are still a bit bare and plants more in leaf towards the front, I filled in spaces and did a bit of weeding. The rest of the day was spent working on more shade plants, I reckon four more trolley loads will see it done, yeh! The sun came out as the day went on and by the end of the afternoon it was lovely and warm.

Home to tea, Ben and I went to vote and then I spent an hour or so in the garden tidying and re-potting cacti and succulents, nearly there with the greenhouse tidy up. Dan cut the grass and it's all looking good. As I was saying earlier the day did get better, Ben announced at tea he's been offered a job. After 11 months of being unemployed after leaving college last June this is great news, he's had lots of interviews but got no where up until now, we are very proud of him. So the day ended very well.


Friday's big news was the swallows are back in the nursery. They spent all day flying in and out the covered area, probably a bit bemused as we've put up the sacks on the wall and changed other things. I'd rather they nested under the overhang than in the covered area as they do make a mess. After an hour in the tunnel potting, weeding and watering I brought another barrow of plants back and put them away in sales of stock beds. The day warmed up as it went on though the sun never made it through the cloud. I gave the track a weed, its so much better than last year, which goes to prove keeping on top of it and removing weeds before they seed really does work, breaking the cycle of seeding, germination and new weeds. I carried on round to our bridge and tidied up the bark and gravel path there too, all tidy for the weekend. First impressions really do make a difference. In between times I sowed more seeds, tidied more shade plants, helped customers and chatted to Andrew, Linda and Eleanor. Another busy productive day, as they all are.


After Friday's warmth Saturday was foggy and much colder, this weather is mad, short sleeves one day four extra layers the next! Another hour in the tunnel while David manned the nursery saw me almost caught up there with more seedlings potted, more space made and a top up water. We were busy with a constant stream of customers and in between I put away plants in the stock beds and tidied and labeled plants for sale. I tidied more shade plants and planted plants in the narrow bed I started last week along the edge of the stock beds. This will give me stock plants to prop from, be a buffer between seeding weeds from the bankings and the stock beds, make the place look good and interesting and lastly give customers planting ideas. One plant combination I put in was Ophiopogon planiscapus 'nigrescens' and Valerian phu 'Aurea' as seen on my visit to Threave a couple of months ago. I love that black and vibrant yellow combination. 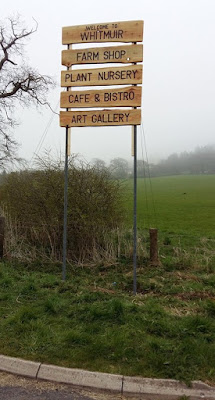 In other news David, Andrew and Pete got the first of the new signs up at the entrance to the farm. Andrew has made a brilliant job of them and hopefully they will attract a lot more people into all the businesses here.


We were a the nursery early on Sunday to help put the cover on one of the farm poly tunnels. 8am on a Sunday! Blah, but it's good to be able to help and we get plenty favours back. It was very foggy and cold with no sign of the glorious sun and heat promised on the weather forecast, hmmmmmmm. My previous experience of helping cover poly tunnels paid off and we were able to get the skin on quickly and easily with five of us. Once partly secured I headed off to open up leaving David to help finish off securing the cover with Pete, Heather, Sam and Juliette. Gradually through the morning the sun burnt off the fog and it was wonderfully sunny and hot and I worked at my outdoor potting bench for the rest of the day.

Great celebrations, I finished tidying, weeding, top dressing and moving the shade plants to their new home, at last. It's good to see all the plants out in the stock beds where customers can browse them. Keeping up the momentum I got 12 plug trays of seeds sown to go over to the tunnel which was about 30 packets of seeds. I do believe the end of seed sowing may also be in sight. The afternoon was spent digging over more of the narrow bed along side the stock beds but to be honest it was too hot, so I eventually went onto watering, getting everything nicely soaked before going home. Once David finished helping with the tunnel he carried on building the new sales table he is creating; a double decker display table for my herbs. So another very busy and productive day and great weather. It was good to get home as we were both tired after the early start and a busy day. Tea, a wander around the garden, watering and then relaxing, sleeping on the sofa, watching the latest episode of Outlander and eating creme eggs. Perfect.

Hot, hot, hot! Another day of glorious sunshine and heat, loving it. After a long lie (to make up for yesterday's early start) and getting into the nursery for opening time it was on with watering. The tunnel will need a good soaking every day as long as this weather continues but I find it quite therapeutic taking time to water properly, or standing day dreaming more like, ha ha. Once I'd watered there and put the next lot of seed trays in the beds it was back to the nursery for a much needed coffee and catching up on emails. Other tasks done today included tidying the planters around the veranda of the cafe, stocking up the sales area, doing cuttings and sowing more seeds, helping customers and tidying the water features, cutting back frosted plants. Much easier now the water is warmer! It was lovely to it out in the sun for lunch and working at my out door potting bench soaking up the sun. Home to tea and house cleaning and chores and then collapsing on the sofa with the dog, a drink and chocolate. It's great to see all the bats flying around outside as the sun sets, lots of swooping and circling and feeding on insects.


What glorious weather for a day off (I half expected it to disappear when I was off). We went walking in another bit of our beautiful country previously unexplored by both of us, Langholm in the borders. After a quick drive down to Lockerbie and then cross country to Langholm we walked up to the monument on Whita Hill and had fantastic views to the Solway, Lake District, Englandshire and north to the Ettrick and Moffat Hills. it was hard going as we haven't done any walking for a while and it's only a tiddler of a hill at 1000ft! It alsmost killed Davd (I'm not kidding) and he wasn't well for the rest of the day. So we halved the planned walk and headed back to the town past the memorial to Hugh MacDiarmid. We had a late picnic lunch at the side of the river in Langholm and tried to get Bracken in the river, but he wasn't keen. An ice cream van turned up, so of course we had to have some, it was much needed. A wee wander around the muckle toon and David still wasn't well so we missed on dinner out and headed home via the scenic route of Eskdalemuir, Ettrick, St Mary's loch, Meggat and Talla reservoirs (I love that road, especially the mad bit between Meggat and Talla), all very beautiful in fabulous weather. I wasn't as tired as I thought I'd be as I did all the driving today. Shower then pizza, catching up with the boys and feet up on the sofa while David slept off what ever has felled him. Fortunately not the heart attack he thought he was having half up Whita Hill!!!!


And as they say in the movies 'That's all Folks'. Hope you are having a great week and enjoying the sun as we are. Catch you later.