on October 21, 2015
This year I decided to put my birthday money together and treat myself to a falconry experience, something I've wanted to do for a while. After some internet research, reading reviews etc, I decided to book at Falconry Scotland who are based at Dalhousie Castle Hotel. I would thoroughly recommend them if you are thinking of doing something similar. The experience was certainly that and the two and half hours flew by (pardon the pun). Our falconer was great, he had lots of information, was great with the group (3 of us flying the birds) and the birds. It's certainly the best £85 I've spent in a while. So what did we do?

We had a general introduction to falconry, Falconry Scotland and the birds before walking over to the lawns at the side of the castle to see our first bird, the Kestral in action. We each got several turns of having the bird flying to the glove, encouraged by a tasty morsel of food, he was then happy to sit and eat on the glove so we got a really good look at the birds up close. The kestral is tiny compared to other birds of prey, as you will see later.


Once everyone had several turns of the wee kestral flying to the glove and seeing it fly to a lure we walked the short distance back to the centre and got the next bird we were to fly which was a Harris Hawk. As you'll see the birds get bigger as the morning progresses. I've seen a Harris Hawk before when I was in Arizona, but didn't get this close to it. For this bird we took it a walk past the castle and along the river side, back through an open paddock and eventually back to the centre. This part lasted about an hour and we were able to see the bird engaging in different flying techniques with plenty opportunities to have it flying to everyone's glove many times. 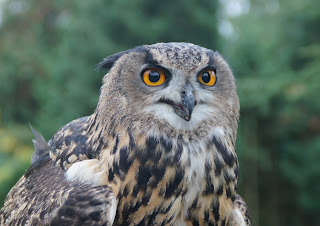 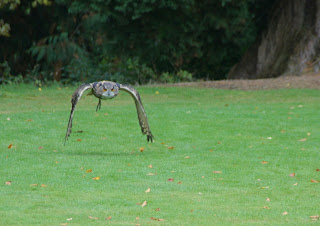 After a while flying the owl and experience the silent flight and his ability to swoop down and fly just above the ground we took him back and got our last bird of the experience. I told you they got bigger. Weighing in at a rather heavy on the arm 11kg was this magnificent Russian Steppe Eagle. We didn't fly him but got to appreciate his magnificence and weight at close quarters, not a bird to mess with when you see his beak and talons.


Last but not least was the raven, this guy is rather interesting, especially if you are an Outlander fan like me, as he has starred in the TV series. It was mentioned he should have a third eye in his forehead too! These are very intelligent birds as are most of the corvid group, he can also speak, when in the mood!


After a fun and fascinating morning David took me out for lunch to a lovely foody pub down the road from Dalhouse. We had lovely food finishing off with an interesting cheese board for David and Lemon Verbena Creme brulee for me, needless to say we didn't need dinner that night! 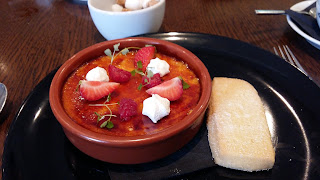 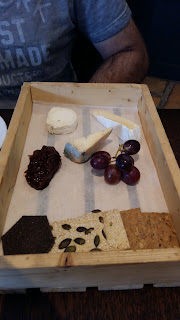