on March 18, 2015
Saturday dawned cloudy but dry and not too chilly so we gathered up the tools to start the Prairie bed in the front garden. First I watered the greenhouses, the sweet pea seeds have sprouted and the cabbage seedlings needed the propagator tops removed as they are getting tall.


Once I'd watered the greenhouses it was on with the new Prairie bed. This is being made from an existing planted area of garden in front of the lounge. It originally had some thin bark, torn landscape fabric, broken wood edging and two weeping willows that were more dead than alive, with one of them lying on its side.

The trees were very easy to remove, I suspect they were partly rotten at the bottom too. A rope around the trunks and pulling the trees from one side to the other soon got them out, a few roots prised out with the spade and job done. We removed them to the bonfire area at the back garden for burning later. The two mature Rhododendrons are staying because they are good plants, provide a screen for the chickens and will be a good backdrop for the new border. I trimmed off some dead branches and left them at that.

Then it was a case of digging the ground over, it was reasonable soil thankfully, so not too hard a job. Although by the end of the day we ached as we haven't done heavy gardening in a long time. I started digging between the two Rhododendrons, working my way back into the middle of the border, edging the grass as I went. This will need a last tidy once I have decided the final size and shape of the border.


As I was digging I wondered about a path through the border, so I drew an outline on the soil with the spade as you can see in the photo below. I'll leave it for a few days, look at it from the house and from the front door then see what I think. It would be interesting as it would add a new vista and feature to the front garden. Once I got to this stage we were tired and sore after a full day so we packed up tools and retreated indoors for showers and dinner, but very happy with what we achieved. Hopefully next week I will get the digging finished and the planting done, as they say, watch this space. I'll be posting more photos as the project progresses.


Some of you may be wondering what is exactly a prairie border. It is a style of gardening that has been around for a few years now. Pioneered by one of my favourite garden designers Piet Oudolf, it combines a natural layout of plants, placed in large swathes and including grasses. Think meadow rather than garden border, think seed heads in autumn and winter extending the season and a repetition of shape, mounds, spikes and upright grasses.

Texture and year round colour are important as is minimum maintenance, ie. no feeding, staking and watering. So choosing the correct plants for your gardened conditions is important. The use of grasses is important as they give the border an airy feel, break up colours and blocks of plants and give great frosty silhouettes in winter.


The other job we did on Saturday was to make a bird table. There was an old tree stump about 5 feet high out in the grass in front of the lounge window, so we used it as the base. David attached a piece of left over plywood to the stump. On this he screwed a nice twisted branch from the will ow we removed in the morning. This gives us lots of space to hang feeders and we can watch the birds from the lounge, and I can get some photos too. 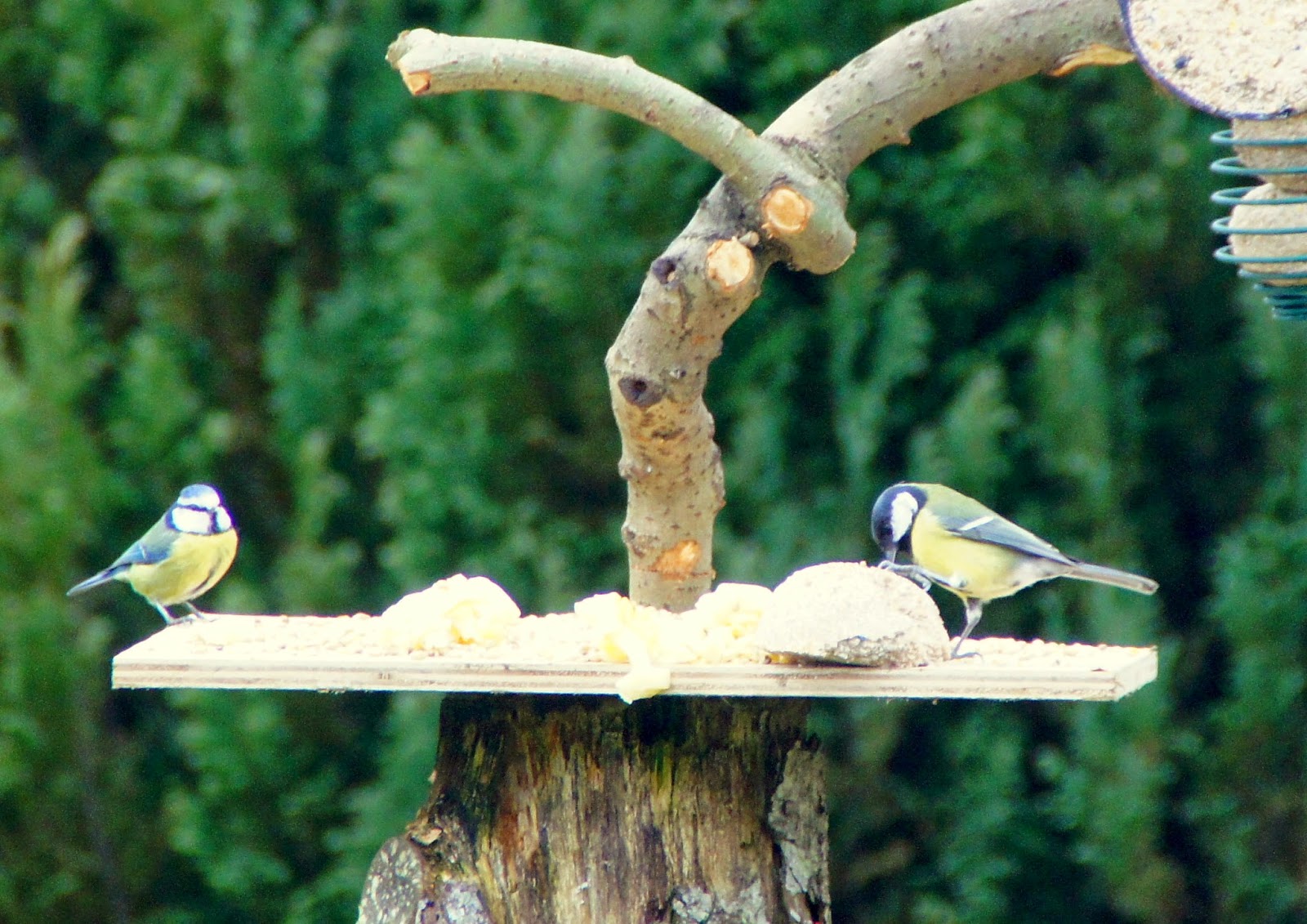 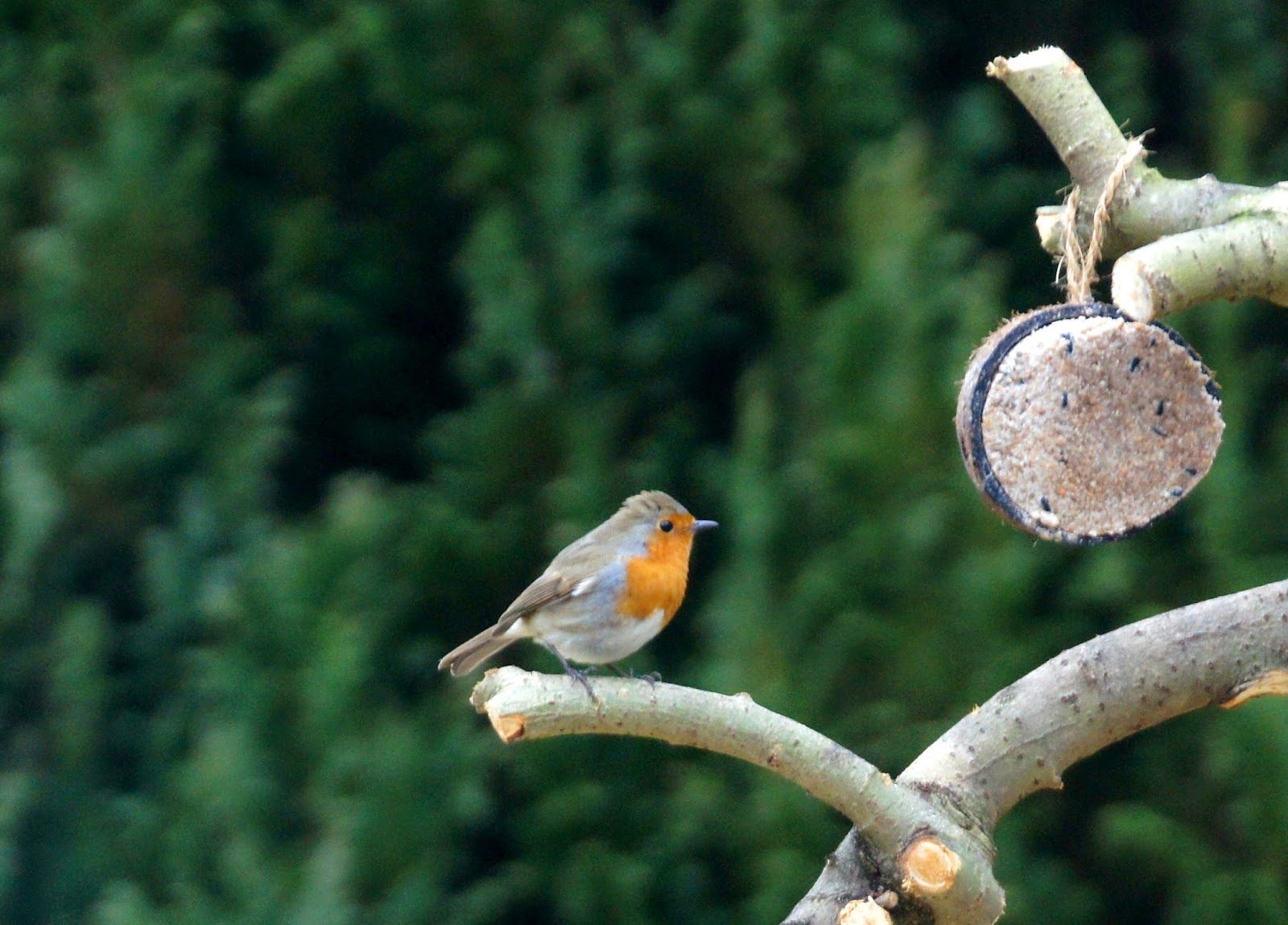